Posted on May 24, 2019 by allisongreenwriter

On the 39th anniversary of the eruption of Mount St. Helens, I tagged along on a geology field trip with students from my college. This was my fourth visit to the volcano (spoiler alert: manuscript-in-progress), and I was hoping to learn something new. Thanks to instructor Carla Whittington, I did. 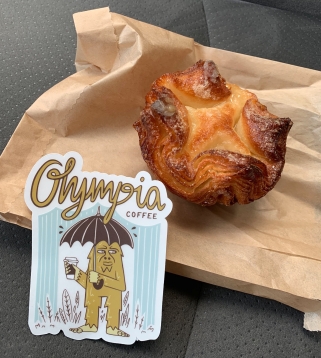 First, though, I learned that the kouign amann pastries at Olympia Coffee Roasting Company are wickedly delicious. I bought one in Olympia on my way through and, arriving at the Mount St. Helens Visitor Center, munched myself into a butter-and-sugar daze. 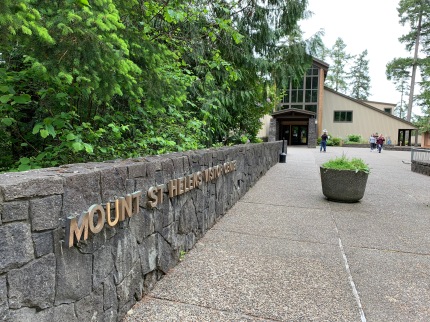 Inside the Center, the students roamed with handouts and clipboards. Most, but not all, had been born long after the eruption and were fascinated by their elders’ stories. At sixteen, I had watched the eruption column from the front yard of our family’s house in north Seattle. Carla, living in Minneapolis at the time, had put a cup outside her apartment window because ash was drifting eastward and she hoped to catch some. Sadly, she didn’t.

House on Toutle River destroyed by the eruption

Our first stop after the visitor center was a county park on the south fork of the Toutle River. Here, almost thirty miles from the summit, lahars flowing down the valley destroyed the park and surrounding homes. Houses collapsing near the road showed what an eruption and four decades of decay can do. 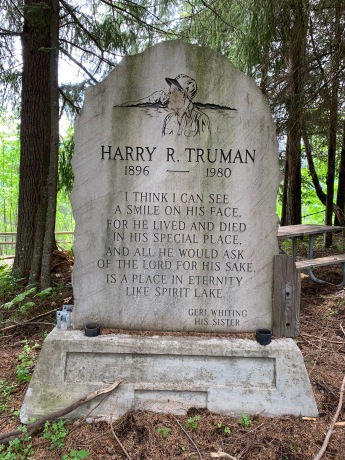 At the old Hoffstadt Bluffs Visitor Center, now privately owned, the gate was open for the anniversary, and I saw the Memorial Grove for the first time. Harry Truman still haunts these forests, as do the others who lost their lives that day, most outside the official off-limits “red” zone. 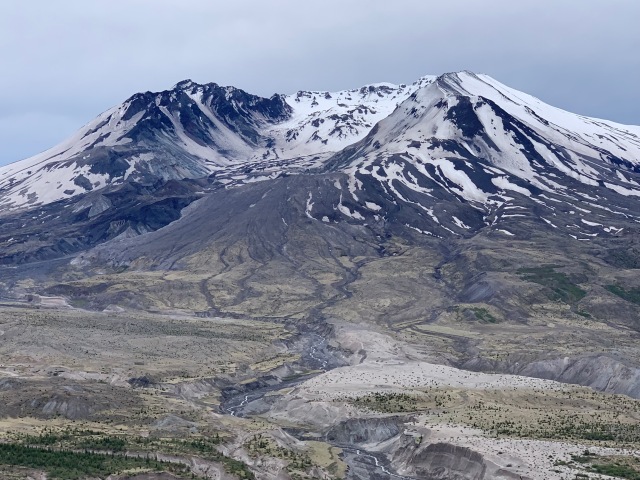 The best part of the day was at the observatory near the summit. Among the experts staffing information tables was Carolyn Driedger, a geologist who had been studying glaciers at the time of the eruption. She and Mindy Brugman had spent the afternoon on the ridge here with Dave Johnston, the volcanologist assigned to monitor the volcano that day. She and Brugman wanted to camp overnight, but Johnston said it wasn’t worth the risk. The next morning, at 8:32, he radioed the United States Geological Survey headquarters in Vancouver: “This is it!”

Carla, who knew Driedger from professional circles, introduced me to her, and Driedger told me that scientists did not know then that volcanoes could erupt in a lateral blast. Only afterwards, as they reviewed changes to the terrain, did they understand what they were seeing near other volcanoes.

But as interesting as it was to learn about the volcano from Driedger, the more visceral thrill was simply listening to someone who had lived through this moment in history. Thirty-nine years ago I had been waking up in Seattle while Driedger and Brugman, driving back toward the mountain, heard the news. Her story connected me to that moment and to all the others whose lives were affected that day: Johnston, Truman, the dead and the surviving. Time was a spiral, not a straight line, and for a moment, I was there as the volcano blew.

Author of The Ghosts Who Travel with Me, a memoir, and Half-Moon Scar, a novel.
View all posts by allisongreenwriter →
This entry was posted in Mount St. Helens, Travel and tagged Mount St. Helens. Bookmark the permalink.