Posted on December 27, 2018 by allisongreenwriter 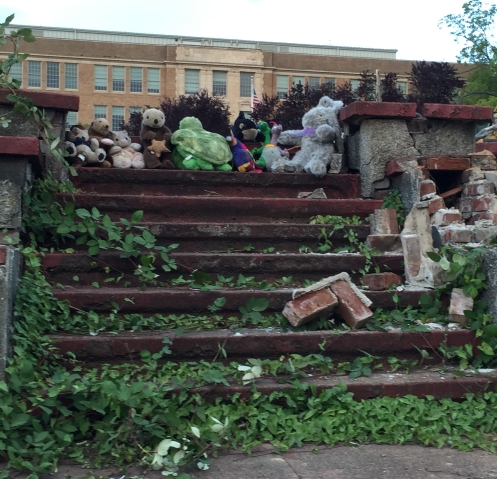 “Let’s start with the end of the world, why don’t we?” So begins N.K. Jemisin’s The Fifth Season, which appeared under our Christmas tree wrapped in cheerful, glittery paper. Arline gave me the boxed Broken Earth trilogy, knowing I’ve been obsessed with apocalyptic novels this year. I just started reading it, so don’t ask me yet how Jemisin plots three novels after the world ends.

Dissertations have no doubt been written on why we enjoy stories about the end of the world. It’s probably for the same reason people enjoy horror (although I don’t) and murder mysteries (these I do). Narrative imposes order, which makes the unimaginable not only imaginable but possibly cathartic. Even the mere fact that each sentence follows the last makes life feel more controlled, less scary. Most of the time.

Samuel Delaney’s 1975 classic Dhalgren, which I hadn’t read until this year, was the least consoling book, probably because it’s the least comprehensible. A young man who wears only one sandal and can’t remember his name wanders a devastated midwestern city. It reminded me of Joyce’s Ulysses, also disorientingly difficult to read and, for me, a book one is glad to have read but wasn’t particularly glad to be reading. What I’ll never forget about Dhalgren is the psychedelic stream of sentences and an ominous elevator, its door stuck open, that eventually swallows an innocent, as cities do.

At the other end of the spectrum is Sigrid Nunez’s Salvation City. A flu pandemic orphans an adolescent boy, who is then adopted by evangelicals in a small town. Of the novels I read this year, it’s the least apocalyptic; in fact, I came to wonder why the plot needed those millions of deaths. Were they the only way to get the son of a history professor and lawyer into the home of a store-front-church pastor and his wife, people his parents would have ridiculed? Regardless, Nunez tells the story of Cole’s coming of age as he navigates the mysteries of this new community with such grace and respect for the people around him that I stopped waiting for the major plot developments one expects from a good apocalyptic novel.

However, if you’re looking for those heart-stopping moments in which the fate of the world hangs in the balance, Nnedi Okorafor’s Who Fears Death delivers. In a post-apocalyptic desert world, perhaps in what we now call Sudan, a girl, born of a soldier’s rape of her mother, grows to realize she is the savior her people have been waiting for. Onyesonwu’s journey from child to sorceress, battling her own demons, is classic and classically satisfying. That Okorafor weaves in contemporary political and social issues makes the story surprising and new.

This year I read another 1970s novel I had neglected until now: Vonda N. McIntyre’s Dreamsnake. Set in a post-nuclear landscape of small, struggling towns, the novel tells the story of an itinerant healer who travels with her bag of snakes. Why had I never read this classic of feminist speculative fiction? I think, in my young-adult desire to reject stereotypically nurturing female characters, I was turned off by the idea of the snake healer. But reading the book now, I’m sad I missed it at that age. Snake is a humble woman in a dangerous world, trying to use her skills and knowledge for the common good. She might have been an appealing model for a young woman trying to find her way.

In the year that Ursula K. Le Guin died, I re-read many of her novels, some of them apocalyptic. In Lathe of Heaven, a man struggles with his ability to change the world by dreaming. Even when he tries to change things for the better, his intentions produce warped, disturbing versions of our world. Le Guin, as always, is a wise and loving writer. She guides us through the apocalypse to a renewed world that, while never perfect, nonetheless offers us space and time to pursue justice, to demonstrate compassion, to flourish.

As disturbing and apocalyptic as this true world too often feels — this real one, not of paper or digital words, but of wood and stone and skin — it, too, affords space and time for justice, compassion, and flourishing love. This is what I wish for all of us in the new year. And many more books to read

Author of The Ghosts Who Travel with Me, a memoir, and Half-Moon Scar, a novel.
View all posts by allisongreenwriter →
This entry was posted in Death and dying, Faith/belief, Justice, Literature, Uncategorized, Writers, writing and tagged books, Justice, Literature, writing. Bookmark the permalink.