Posted on July 25, 2020 by allisongreenwriter

At the north end of the campground, in a compound of recreational vehicles, a tall pole sported the Stars and Stripes and the Gadsden flag – the yellow one with the snake hissing, “Don’t tread on me,” the one associated with libertarians, Tea Partiers, and white supremacists.

At the south end of the campground were the tents and hippy vans, the queers and more people of color than we have ever seen camping at South Beach on the Olympic Peninsula. That’s where we were, of course.

We chatted briefly with two young women about how to snag beach-front sites in the small campground that takes no reservations. When they had settled in, they invited us to their campfire that night. And that’s how we learned that Maria, daughter of Venezuelan immigrants, and her partner Lyv, granddaughter of lesbians, were living in Spokane and dreaming of a move to California. They had gotten to know the nice family on the other side of their tent, and they were so relieved, they said, to be surrounded by people they could trust. We felt the same.

Danger can arise anywhere, but recent events made us particularly apprehensive about camping on the peninsula this year. In June, a family described as multiracial drove through Forks on their way to a Forest Service campground. They were accosted in a parking lot by seven or eight carloads of suspicious locals and followed out of town. When they heard gunshots, they decided to leave their campsite, but someone had felled trees on the road, barricading them in. They had to be escorted out of town for their own safety. When we drove through Forks, we pulled into the gas station behind a black truck with hand-written white letters encouraging us to learn more about QAnon. 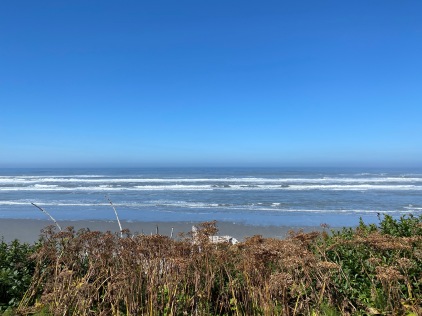 The view from our van (photo by Arline)

Still, we were glad to return to the campground where we have had good experiences. No grey whales swam by this time, but we took long walks on the sandy beach and fell asleep to the roar of waves. And the unexpected company of the young women cheered us. Our last morning, we woke to notes and drawings framed in driftwood on our picnic table: “The musings and stories you’ve collected on your journey through life are incredibly awe-inspiring to us both.” The day before one had said, “We want to be you someday!” That’s when I realized: we are now the queer elders. And the kids are more than okay; they are passionate and loving and creative and smart. We slept better knowing they were nearby.