Posted on August 11, 2017 by allisongreenwriter 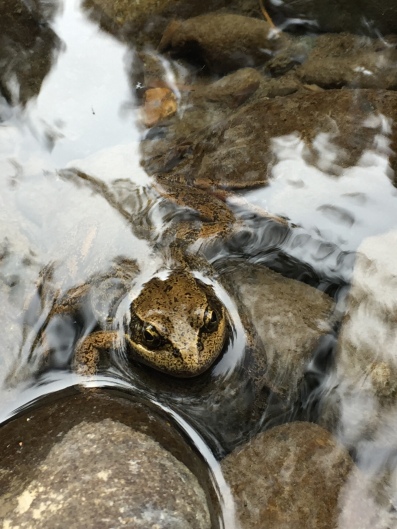 On a recent camping trip, I wedged the legs of my canvas chair into the rocks along the Cowlitz River and paddled my toes in the cold water. It was 95 degrees in the campground just outside Mount Rainier National Park, so warm that, although I wanted to nap in our van, I couldn’t get comfortable, even with the doors and windows open and a battery-powered fan turning. The only cool spot was the river.

Our friend Margaret sat nearby, reading. Her partner Machelle and Arline were up the slope in our campsite, napping. The sun had just dipped below the tips of the Douglas firs and red cedars across the river, so Margaret and I were in shade, but filtered light turned the river rocks shades of buttery yellow.

I had been at the river for at least half an hour, watching the water swirl, when I realized a large frog was sitting near my left foot. “Margaret!” I whispered. She looked across at me, and I pointed down. We peered at it. The frog, the color of wet stone, was completely still, golden-lidded eyes open and unblinking. Was it real? Was it alive? I touched a twig to its right back leg, and the leg twitched. Margaret said she could see, from the side, its gullet move.

I kept an eye on the frog over the next hour. Once it blinked. Later, it slightly shifted position. But it stayed there, still, camouflaged among the rocks.

One explanation I read for the frog’s behavior is that it had shut down to survive the heat, a process called “estivation” – the warm-weather equivalent of hibernation. In recent months, as Arline and I have coped with her cancer diagnosis, five weeks of radiation, two surgeries, and multiple tests and appointments, there have been times I wanted to enter this state myself: lower the blinds, throw the sheets over my head, and shut my eyes. I often sleep nine to ten hours a night, the luxury of not working this summer, and still sometimes I nap in the afternoons, my eyes closing as I attempt to read. But eventually I emerge from these periods of estivation to do the laundry, send emails, help Arline with her exercises, and do whatever else is needed. Even when it’s hot, frogs and humans need to eat.

But that’s not right. I’m describing the frog’s stillness – and my desire for it – as a form of hiding, of retreat. The frog was not hiding. The frog was doing what it needed to do to survive. It was slowing, quieting. Less like my naps and more like my attempts at meditation. I try to meditate every day but I don’t always make time for it. I’ve found a web site with recordings, and I like the woman’s calm voice telling me, at the end, to wish myself well. The frog had, perhaps, temporarily narrowed its focus to breathing, the way I’m supposed to do in meditation. That afternoon, leaves drifted by, the sun traveled behind the trees, and our bodies simply breathed.

After awhile, Arline joined me at the river. The path down from our campsite was thick with roots and rocks, and she needed to lean on me as she navigated with her still unbending knee. Once she had admired the frog and settled in her chair, she noticed another frog to her right. This one was speckled, what I later learned was a Cascade Frog (the first was probably a Red-Legged), and it was also motionless. It rested in the river, only its nose and eyes above the water that eddied around it, cool and clear.

I’ve been meditating to cope and writing in my journal and camping – and I’ve been eating. Usually I can resist something sweet for at least a few days at a time, but not lately. During the long five weeks of daily radiation, Arline and I got in the habit of a cup of coffee and a cookie every afternoon. She wanted to cut back on sugar – many sources say it feeds cancer – but it was hard. We wanted something small and satisfying, a shared moment of quiet in the afternoons. In other words, we accompanied our estivation with a treat.

So we sleep, we nap, we eat. We spend time with friends and grandchildren. We laugh with Margaret and Machelle, taking selfies on our campsite picnic table. And we sit by rivers and look at frogs. We’re surviving. We are.