Posted on December 29, 2016 by allisongreenwriter

One day recently we happened upon the man as he was making them. He told us that at larger parks, he gathers crowds who watch him work. The sculptures never last long, he said; kids knock them down at night. But he comes back and makes new ones.

Stacking rocks, one on one, is not so different from stacking words, one on one to the end of a sentence. Words don’t get knocked down so fast, but they do get read quickly and, for the most part, are soon lost to memory.

I have no regrets for the many books I’ve read whose characters have faded forever; the reading in the moment was what mattered. But there’s something special about the words that stay. Three books written by friends that I read this year have stayed and stayed.

Donna Miscolta’s book of linked stories, Hola and Goodbye, brought me into the backyards and kitchens of three generations of connected family and friends in a city near San Diego. The characters dream big, and too often fail to reach those dreams, but the dreaming keeps them alive for years. Lyla becomes, not a Broadway star, but a fortune teller. Julia wanders through Mexico, trying to find her roots. In small, significant moments and perfectly chosen details, Donna, a member of my writing group, gives her characters dignity. Whatever mistakes they’ve made, whatever circumstances have weighed too heavily, they keep trying.

Lonny Kaneko’s poetry collection, Coming Home from Camp, was recently reprinted with a number of newer poems. I will be forever grateful to Lonny for hiring and mentoring me at Highline College, but I’m just as grateful for his poems. They are timely reminders of life in the concentration camp in Idaho where Lonny and his family were incarcerated in the 1940s. Dignity makes an appearance here, as well: “At 70, my father stands between dignity and dust.” But camp has hollowed him out, made him “empty as an open hand.” Lonny responds with poetry: “Our words,” he writes, “work a web around us./They house our grief.” His poetry turns readers into witnesses. 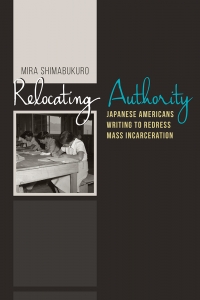 Although Lonny was too young to write when in camp, many adults around him were writing. My friend Mira Shimabukuro’s Relocating Authority: Japanese Americans Writing to Redress Mass Incarceration unearths many ways that Japanese Americans fought against imprisonment — with words. They argued in diaries, documented in notebooks, and wrote poems, petitions, and manifestos. Mira finds inspiration in these documents; they remind us that we all can “find ways, earnestly and wisely, to rewrite-to-redress and rewrite ourselves.” The book is a stunning combination of theory, research, and personal revelation, inspiring in its own right.

While it may sometimes feel as if writing in hard times is fiddling while Rome burns, in fact it’s more necessary than ever. Our new president has excoriated the kinds of immigrants who populate Donna’s stories and promised a repeat of Lonny’s experiences. We must continue to build our sentences, word on word, because they keep us standing between dignity and dust.

1 Response to Dignity and Dust