Posted on December 13, 2015 by allisongreenwriter 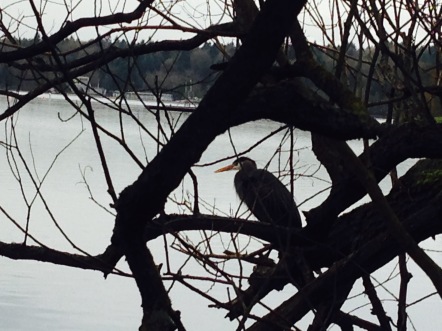 Most every morning on sabbatical for the last three months, I’ve crawled out of bed after Arline has left for work. I’ve put on my sweatpants, ground coffee, and set up the iPad on the dining room table to read the news (confession: Facebook news first, newspapers second). After coffee and oatmeal, I slide my slippers over to the computer to read or write or do research. At lunchtime, I stop to check email and get some exercise. Then I’m back to the project.

It’s relatively quiet here in the co-op where we live, although city workers are often blasting leaf blowers at the bike lanes by 7:30 in the morning. Children come from the day care down the street many afternoons to play in the park. Tethered to each other by hands and string, they shriek and laugh down the path on the way to the playground. Sometimes a door opens and closes in the hallway, and footsteps cross the floor above me.

Mostly, these sounds are comforting backdrop to work that has been far from comforting. I’ve been reading U.S. history I never knew and writing about white privilege. One of my first questions was about my great grandparents, who homesteaded in Montana in the early twentieth century. Whose land were they occupying? I wondered. Turned out it had belonged to the Apsáalooke (Crow) Nation. This led me to a memoir by Alma Hogan Snell, who grew up learning the stories and skills of her grandmother, Pretty Shield, and to a book of Apsáalooke history by Joseph Medicine Crow.

This example set the pattern: I would start with an ancestor and use that person’s time and experiences to launch my research. I used Ancestry.com to make a family tree, and one of the first surprises was that a set of great great grandparents had taken the Oregon Trail. I read a history of white-Indian relations along the trail and diaries by women emigrants. The recently published Indigenous Peoples’ History of the United States gave a broader context. Along the way, I found the story of George Bush, a black man who took the Oregon Trail with his white wife, and, denied the ability to settle in Oregon because of racist exclusion laws, turned north and settled with friends and family in what was then the Washington Territory and is now Thurston County. Even then, he had to get a special provision from the government to own the land he was homesteading because noncitizens couldn’t homestead, and African Americans weren’t citizens.

Bush’s white friend, Michael T. Simmons, helped Bush get approval to own his plot. He was one of many whites I found in my research who were sympathetic to people of color and who actively challenged racist laws and policies. Many more whites actively engaged in racist behavior, like William Boeing, founder of our famous aircraft company, who had an explicit whites-only hiring policy until World War II and who included a covenant for his housing development in Shoreline that excluded people of color, unless they were domestics working for whites.

I kept wondering, as I read: Where did my relatives lie between these poles – just and unjust, racist and anti-racist? My Oregon Trail ancestors were following in the literal footsteps of hundreds of thousands who had walked westward before them. Did they think about the damage the migration was doing to Indian communities? Did they see their complicity in reducing independent Indian nations to colonized subjects of the U.S. government?

What I was really asking was this: How complicit am I? What is my Oregon Trail?

The days have grown shorter and gloomier since my sabbatical began in September. Something inside me is gloomier, too, facing this history and the realization that there is so much more I still don’t know. At the same time, the work has kindled an urgent need to act. I just read a book on the Japanese American community in Seattle before World War II. The author quotes Aki Kurose, famous for her teaching and activism, on her community in what is now called the International District, the only area in which Japanese, Chinese, Filipino, and African Americans were allowed to live when she was a girl in the 1920s and 30s: “My dad loved to bake, so every Friday evening he’d make jellyroll and then all the neighbors would come in to have jellyroll and we’d just have a good time, listening to music and just being social….And the neighborhood was very diverse. And there were many Jews and a Chinese family, and several black families, and we went in and out of each other’s homes all the time.”

As I read about this family sharing jellyroll with their neighbors, I felt the dread of what was coming: in another decade, Kurose and her parents would be imprisoned. What, I thought, did white people do to stop imprisonment then? What more can I do to stop the injustices now?